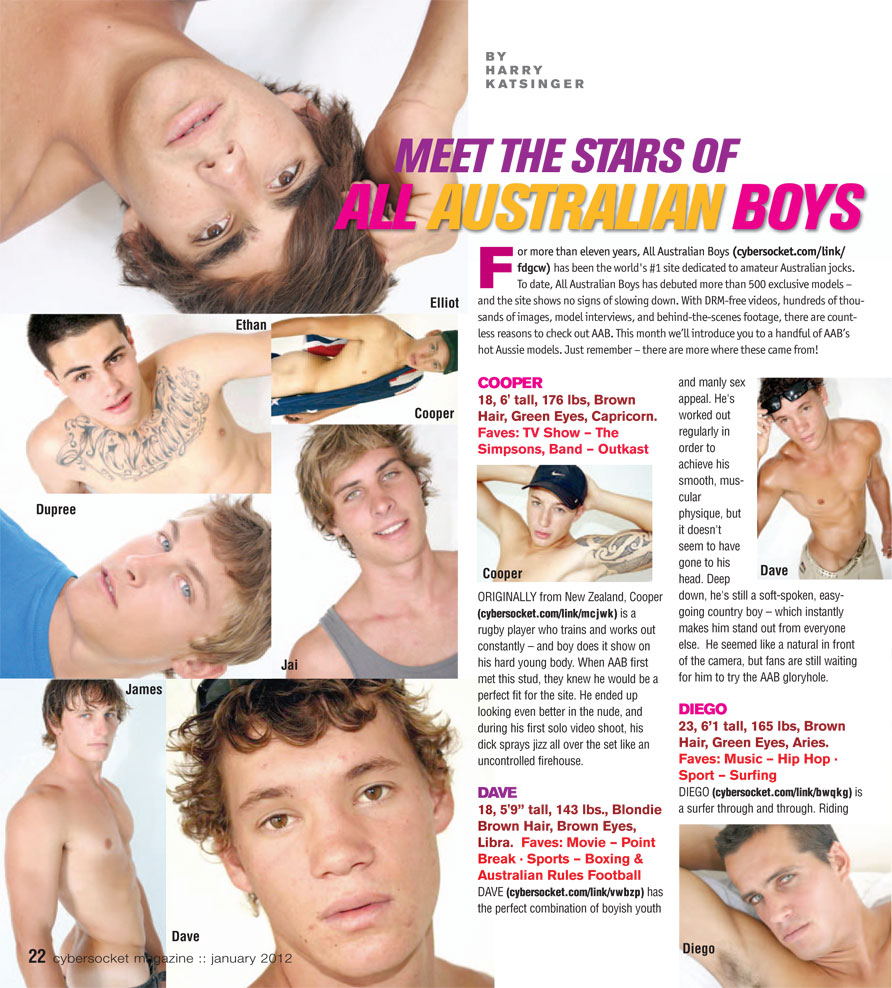 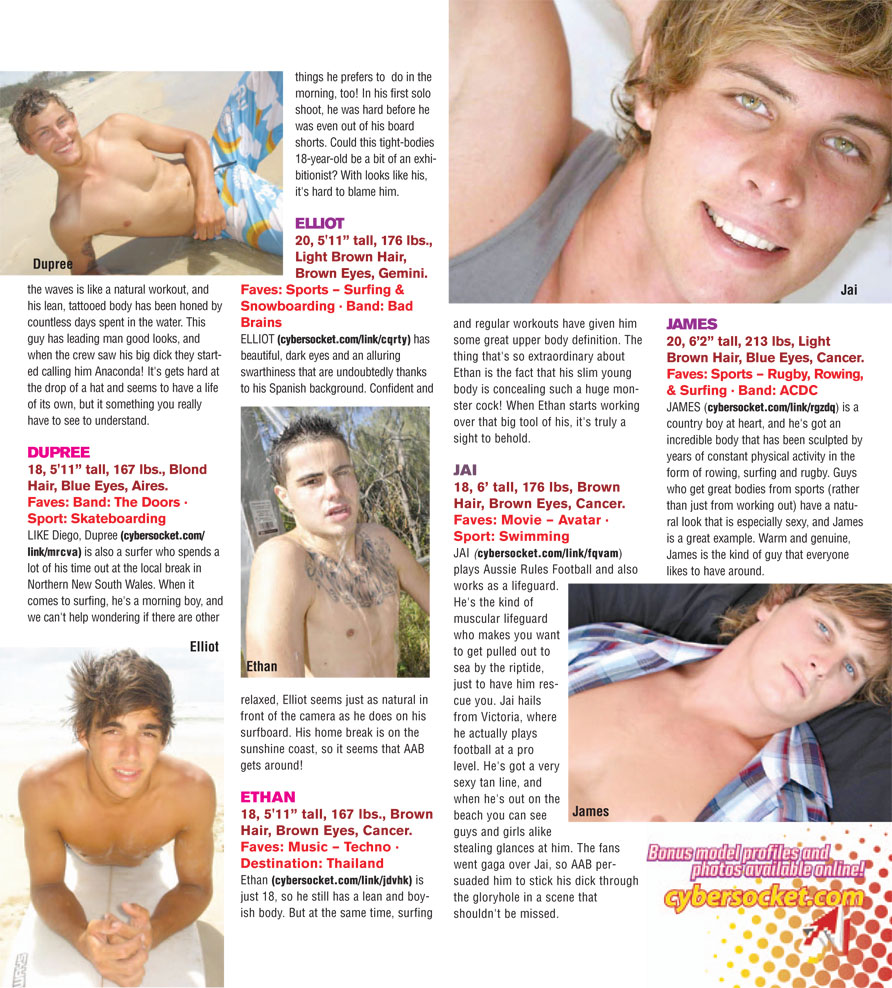 Meet The Stars Of All Australian Boys

For more than eleven years, All Australian Boys has been the world's #1 site dedicated to amateur Australian jocks. To date, All Australian Boys has debuted more than 500 exclusive models and the site shows no signs of slowing down. With DRM-free videos, hundreds of thousands of images, model interviews, and behind-the-scenes footage, there are countless reasons to check out AAB. This month we’ll introduce you to a handful of AAB’s hot Aussie models. Just remember there are more where these came from!

DAVE
18, 5'9” tall, 143 lbs., Blondie Brown Hair, Brown Eyes, Libra
Faves: Movie Point Break · Sports Boxing & Australian Rules Football
Dave has the perfect combination of boyish youth and manly sex appeal. He's worked out regularly in order to achieve his smooth, muscular physique, but it doesn't seem to have gone to his head. Deep down, he's still a soft-spoken, easy-going country boy which instantly makes him stand out from everyone else. He seemed like a natural in front of the camera, but fans are still waiting for him to try the AAB gloryhole.

DIEGO 23, 6’1 tall, 165 lbs, Brown Hair, Green Eyes, Aries
Faves: Music Hip Hop · Sport Surfing
Diego is a surfer through and through. Riding the waves is like a natural workout, and his lean, tattooed body has been honed by countless days spent in the water. This guy has leading man good looks, and when the crew saw his big dick they started calling him Anaconda! It's gets hard at the drop of a hat and seems to have a life of its own, but it something you really have to see to understand.

DUPREE
18, 5'11” tall, 167 lbs., Blond Hair, Blue Eyes, Aires Faves: Band: The Doors · Sport: Skateboarding Like Diego, Dupree is also a surfer who spends a lot of his time out at the local break in Northern New South Wales. When it comes to surfing, he's a morning boy, and we can't help wondering if there are other things he prefers to do in the morning, too! In his first solo shoot, he was hard before he was even out of his board shorts. Could this tight-bodies 18-year-old be a bit of an exhibitionist? With looks like his, it's hard to blame him.

ELLIOT 20, 5'11” tall, 176 lbs., Light Brown Hair, Brown Eyes, Gemini
Faves: Sports Surfing & Snowboarding · Band: Bad Brains
Elliot has beautiful, dark eyes and an alluring swarthiness that are undoubtedly thanks to his Spanish background. Confident and relaxed, Elliot seems just as natural in front of the camera as he does on his surfboard. His home break is on the sunshine coast, so it seems that AAB gets around!

ETHAN
8, 5'11” tall, 167 lbs., Brown Hair, Brown Eyes, Cancer
Faves: Music Techno · Destination: Thailand
Ethan is just 18, so he still has a lean and boyish body. But at the same time, surfing and regular workouts have given him some great upper body definition. The thing that's so extraordinary about Ethan is the fact that his slim young body is concealing such a huge monster cock! When Ethan starts working over that big tool of his, it's truly a sight to behold.

JAI
18, 6’ tall, 176 lbs, Brown Hair, Brown Eyes, Cancer
Faves: Movie Avatar · Sport: Swimming
Jai plays Aussie Rules Football and also works as a lifeguard. He's the kind of muscular lifeguard who makes you want to get pulled out to sea by the riptide, just to have him rescue you. Jai hails from Victoria, where he actually plays football at a pro level. He's got a very sexy tan line, and when he's out on the beach you can see guys and girls alike stealing glances at him. The fans went gaga over Jai, so AAB persuaded him to stick his dick through the gloryhole in a scene that shouldn't be missed.

JAMES
20, 6’2” tall, 213 lbs, Light Brown Hair, Blue Eyes, Cancer
Faves: Sports Rugby, Rowing, & Surfing · Band: ACDC
James is a country boy at heart, and he's got an incredible body that has been sculpted by years of constant physical activity in the form of rowing, surfing and rugby. Guys who get great bodies from sports (rather than just from working out) have a natural look that is especially sexy, and James is a great example. Warm and genuine, James is the kind of guy that everyone likes to have around.

MITCHELL
18, 5'9” tall, 132 lbs., Brown Hair, Green Eyes, Aries
Faves: Sports Breakdancing & Parkor · Destination: Brazil
Mitchell may have seemed a little bt shy when he did his first scene, but before long he had loosened up and was showing off for the camera, doing skateboard tricks and backflips. This hot young 18-year-old is athletic and he immediately caught the eyes of the All Australian Boys crew. When he did his first solo, everyone was thrilled to see that he had a big dick to match his hot little body, too!

TAJ
21, 5'8”, 163 lbs., Brown Hair, Blue Eyes, Leo
Faves: Movie Dances With Wolves · Band: Kings of Leon
Taj is another cute young guy from the country, and when he decided to do a scene for All Australian Boys he just packed his ute and hit the road for his first modeling gig. Appearing on a popular website might go to the heads of some guys, but Taj still prefers the natural beauty and down-to-earth qualities of the country life. He also loves sports, and he spends as much time as he can surfing at the beach or playing Aussie Rules Football. Everything about this young stud is perfect, from his body to his personality, and that's what made him such an ideal All Australian Boy.